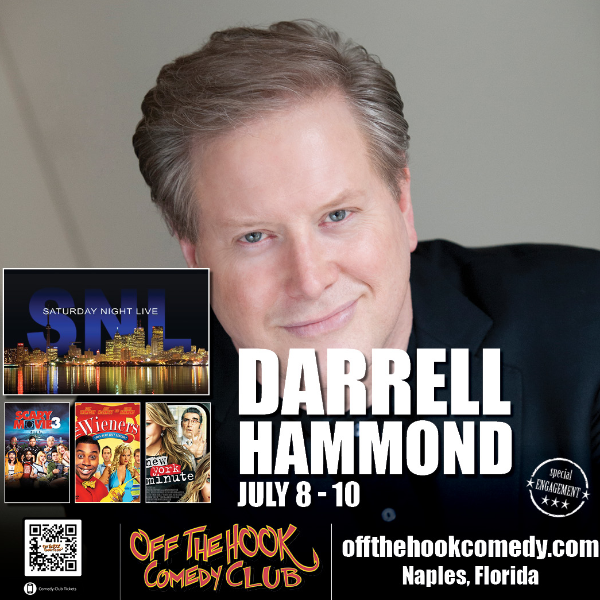 VIP Suite of 5 is located on the side wall on a raised platform. This is private table for up to 5 guests Maximum.

Each show has a 2 item minimum purchase per person. (any combination of food & beverage will satisfy our minimums.)

Actor/comedian Darrell Hammond fondly recalls his first taste of show business at age five practicing the impressions of his family members on the porch of their home in Melbourne Florida. It wasn’t many years later when Darrell realized he wanted to submerge himself in the pursuit of bringing his comedy and impressions to a much bigger stage. For years now, Hammond has brought to life a cavalcade of politicians, media figures, celebrities and newsmakers on television. Darrell is known for being one of the most prolific comedians of his time. He holds the title for being the longest-running cast member on SNL. He frequently tours comedy clubs and theaters boasting a number of brilliant impressions in his act that keep people laughing nationwide.

Hammond has brought a number of wonderful impressions to SNL over the years. Television critics and viewers alike, for their accuracy and range, have applauded each and every one of his impressions. Amongst the great number of people he has mimicked include; Bill Clinton, Sean Connery, Regis Philbin, Dan Rather, John Travolta, Jesse Jackson, Richard Dreyfus, Jay Leno, Donald Trump, and Ted Koppel.

In addition to his SNL appearances, Hammond has been seen in a number of feature films and television shows. As a truly versatile actor, Darrell has displayed his talents in both dramatic and comedic roles. Some of his feature films include Screen Gems feature WEINERS and the Regency feature BOB BAILEY’S DISCO BALLS. He has also starred opposite Mary Kate and Ashley Olsen in Warner Bros’ NEW YORK MINUTE and in the Dimension features SCARY MOVIE 3 and SCARY MOVIE 6. He shared the screen with Frankie Muniz and Hillary Duff in MGM’s AGENT CODY BANKS. Darrell also starred with Anthony Hopkins and Alec Baldwin in El Dorado Picture’s THE DEVIL AND DANIEL WEBSTER. He received a tremendous amount of reviews for his portrayal as a deranged but intense criminal defense lawyer in Dick Wolf’s LAW AND ORDER: SVU. Darrell also disturbed audiences with his masterfully creepy roll as The Deacon in the television series DAMAGES. Additionally, he did a guest spot on NBC’s THIRD ROCK FROM THE SUN. His other film credits include an appearance in Universal’s BLUES BROTHERS 2000 which also starred Dan Aykroyd and Disney’s CELTIC PRIDE. In 1999 he moved audiences everywhere by playing the voice of Master Little in Disney’s animated hit THE KING AND I.

A Native of Florida, Darrell began doing his impressions and comedy early on in life, but his real pursuit of a career in performing began after graduating from the University of Florida at Gainesville. After college, Hammond spent several years in New York appearing in many off-Broadway productions and honing his stand up at the local comedy clubs. With his acerbic wit and masterful impressions, Darrell quickly became a favorite on the comedy circuit. He would also frequently display his comedic styles performing on a wide array of local and national radio stations.

Although it has been a dream come true for Darrell to be a regular on NBC’s SATURDAY NIGHT LIVE, one of Hammond’s biggest honors came at our nation’s capital in April 1997. During a surprise appearance with President Bill Clinton, Hammond was widely praised by the media for his dead-on impression of the President at an event before a great number of government officials and members of the Washington Press Corps. In an equally impressive fete at 2001’s WHITE HOUSE CORRESPONDENTS DINNER, Darrell received a standing ovation for his performance in front of 2000 press people and President George W. Bush.

Darrell continues to move audiences with his comedy, performing in New York and throughout the entire country. Darrell gave Comedy Central it’s biggest ratings to date for a 1/2 hour comedy special performing in his own COMEDY CENTRAL PRESENTS: DARRELL HAMMOND. Darrell also appears frequently on CBS’ “LATE SHOW WITH DAVID LETTERMAN”, and NBC’s “THE TONIGHT SHOW WITH JAY LENO”, and “LATE NIGHT WITH CONAN O’BRIEN”. As an actor, he continually looks for new challenging roles to expand his talents in Film and Television.

Recently, Darrell has seen a massive resurgence in national notoriety due to his uncanny impression of Donald Trump. From his first impression of Trump on SNL 15 years ago (earning him the praise of Trump himself), Darrell’s imitation of the outspoken presidential candidate has evolved along with all of the extreme changes in his public appearance. Hailed as “The Comeback Kid” by the Wall Street Journal, Darrell’s impression has become a favorite of the country, drawing some of the largest viewership to SNL in recent history.