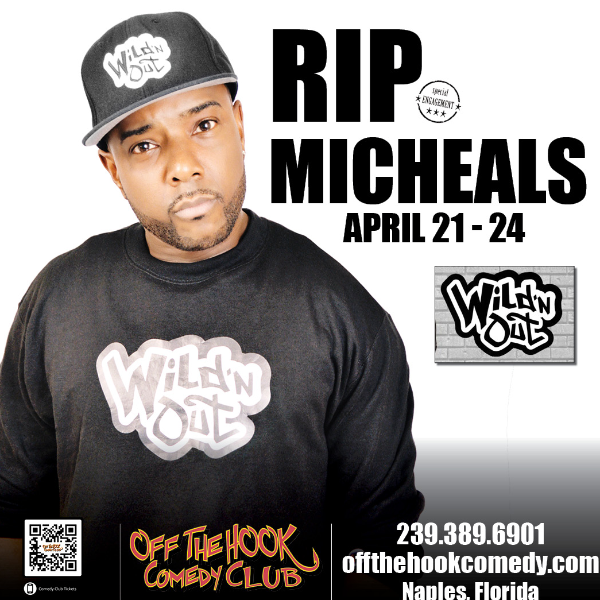 If the name Rip Micheals doesn't ring a bell, you haven't experienced comedy at its finest. Known commonly for his antics on MTV's Wild 'N Out, Rip's brash and in-your-face satire led to him to share the stage alongside comedic legends such as Martin Lawrence, Cedric the Entertainer, Kevin Hart, and Mo'Nique. Rip's mixture of intelligence and originality makes him one of the industry's most versatile and sought-after comedian.

Born and raised in Chicago, Rip developed a love for entertainment at an early age studying theatre in high school. While in college, he started performing at comedy clubs and met Dave Chapelle, who urged him to continue. After graduation, Rip focused on acting and moved to New York City. Shortly after moving to New York, he rapidly became the underground favorite at comedy shows throughout the city. This solidified his loyal fan base, which propelled his status as one of the NYC Kings of Comedy Superstar.

Before getting his big break on television, Rip honed his unique stand up skills by performing at more than 250 colleges and universities. His fine-tuned comedic delivery in the college circuit gained the attention of the Navy Entertainment and he was asked to provide live entertainment to military members and their families stationed overseas and on deployed ships. Rip performed at over 150 military bases around the world, including Spain, Greece, Italy, and Germany. Encouraged by his early success, Rip taped his One Man Show at the Mohegan Sun in front of a sold-out 10,000-arena. Coinciding with the show, Rip coined the word "Clatchet," which has been inducted into the urban dictionary.

Due to his keen sense of humor, Rip's experience on a variety of TV shows goes as far as NBC's Last Call With Carson Daly, Centric's According to Him & Her, Oxygen's Living with Funny, Starz series Staanndup, BET's Comic View, HBO's P. Diddy's Bad Boys of Comedy, and NBC's Mr. Robinson, just to name a few. In addition to his comedy, his acting credits includes roles in Law & Order: Criminal Intent, Nurse Jackie, Mr. Robinson, Men In Black 3, Love Don't Cost A Thing, and Players Ball.

He has an outstanding resume of making people laugh proves not only does he bring to the table a whole new agenda, but also, he is the game-changer. After three seasons on Wild 'N Out, his brash character prompted to starring in the television spin-off, Wild 'N On Tour. A few years later, he created the show's wildly successful tour and sold out 40+ arenas nationwide.

With an entrepreneurial can-do mindset, Rip continually sets out to make something from nothing. In doing this, he has quietly built the April Fools Comedy Jam to the point where he recently sold out the Barclays Center with 14,000 in attendance. Year after year, Rip Micheals has curated the greatest line-up of stand-up comedy imaginable with icons such as Cedric The Entertainer, Sheryl Underwood, Michael Blackson, Lil Rel, John Witherspoon, Paul Mooney, Brandon T. Jackson, Gary Owen, Faizon Love, Bill Bellamy, Affion Crockett, Luenell, Tony Roberts, AJ Johnson and many more.

While he emerges as a major force in his own right, his peers are stating he's the one to watch.

In addition to getting laughs on stage, Rip Micheals also served as a writer for some of Hollywood's comics. He wrote for comedians such as Brandon T. Jackson, Anthony Anderson, Cedric's CW Barber Battle, and more. Also, he toured with the likes of Kevin Hart, Martin Lawrence, and the late comedian Bernie Mac.

Along with his TV and film appearances, Rip has several well-deserved accolades under his belt: winner of 2013 Bay Area Black Comedy Competition, two-time Association for the Promotion of Campus Activities (APCA) Comedian of the Year, American Comic Awards - College Entertainer of the Year, USO and MWR Comedian of the Year in 2008, 2009 and 2011.

Some of Rip's upcoming projects include a comedy special on Kevin Hart Present Laughing Out Loud, opening for Nick Cannon across the country, and executive producing a few projects of his own. His relentless work ethic proves that persistence and diligence go hand in hand in the comedic world.

Rip's relentless work ethic proves that persistence and diligence go hand in hand in the comedic world. Rip Micheals continually pursues his creative endeavor and is currently executive producing a few projects of his own. His latest comedy special is Kevin Hart Present Laughing Out Loud.

Some of Rip's upcoming projects include a comedy special on opening for Nick Cannon across the country and executive producing a few projects of his own.